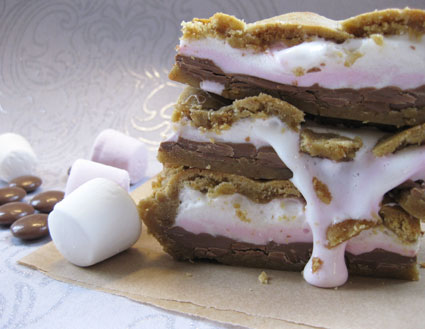 Most Americans and Canadians will know exactly what I’m talking about when I mention S’more, but if you’re a Brit, like me, chances are you’ll have a ‘huh?’ look on your face.

In the UK, we never grew up with the S’mores thing, and in fact I only really heard about it last year, so I was surprised to find out it has real history! I read recently that they first appeared in the Girls Scouts Handbook back in the 1920’s.

The most recent time I saw S’Mores was on The Apron Gal blog, so I have unashamedly stolen the idea and made it British (well with British ingredients).

For those other Brits that have no clue what I’m talking about, basically S’mores are toasted marshmallow and chocolate sandwiched between 2 biscuits. S’more is abbreviated from ‘some more’, as in “please sir, can I have some more?”………see how I made it British – good old Dickens, still going strong after 200 years!!

Most recipes I’ve seen for S’mores involve the American ingredients, Graham Crackers and Hershey chocolate, both of which are pretty thin on the ground in the average UK supermarket, so I’m going all out British and have created a baked S’mores recipe using traditional and much loved ingredients from the good old United Kingdom.

Of course this recipe can be adapted to use the basic ingredients from any country, and it would be great to hear about other S’mores from around the world!!

For the Filling:
100gms of marshmallows – to be British I used Princess Pink and Whites
100gms Chocolate Buttons – I used Galaxy Counters because my local supermarket had them on special offer, but you could use Cadbury’s Buttons, or even chunks of Galaxy or Dairy Milk

First start by getting a sturdy plastic bag, like a Ziploc bag, and place your Digestives inside. Give them a good hammering with a rolling pin, so you get a fine crumb.

Next cream the butter and sugar together until light and fluffy. Add the egg and digestives and mix till incorporated. Don’t through your Ziploc bag away, you’ll need it later.

Sift the flour and add to the mix. You should get a stiff dough.

Get yourself a piece of greaseproof paper, a few inches bigger than your dish. I used a 5″ square dish, but I had enough ingredients to go a bit bigger. Scrunch up your paper, flatten out, and grease with butter. 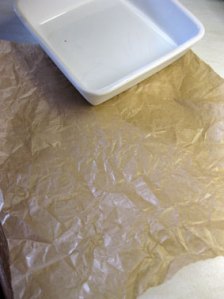 Now take 2 thirds of your dough, sprinkle flour on top, and on your rolling pin, and roll to about half a centimetre thick.

Pick up the paper and lay the whole lot into the dish. Push down and mould it with your hands, so it tucks into the corners and the dish is fully lined.

Now the filling…….first scatter your chocolate in the bottom of your crust. 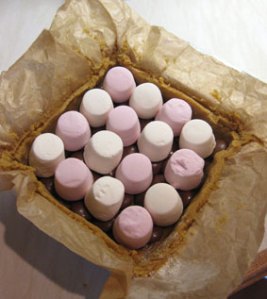 Remember that Ziploc bag I told you to save? Well, place the last third of your dough inside and roll out thinly. 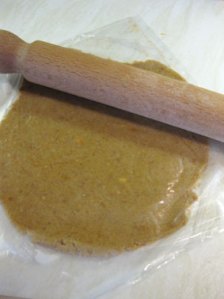 Cut down one edge and the bottom of the bag, and peel one side of the plastic bag off the dough.

Invert the bag, with the dough attached, over the marshmallows and peel the rest of the bag off.

Tuck the edges in, and seal the top of the crust, with the bottom in the dish. As you can see, mine isn’t the neatest thing in the world – but never mind.

Bake in the oven for 20 to 25 minutes, or until the crust starts to turn golden brown. 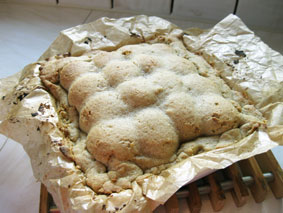 Remove from the oven and leave in the dish until cool. Now I understand its tempting to cut into it when it’s still warm, but be warned, if you do, due the the size of the marshmallows involved, you’ll have sticky, gooey, molten marshmallow mess, which is nearly impossible to eat. I actually put mine in the fridge to fully cool.

Once it is cool, you can remove the whole thing from the dish by lifting the paper, which the crust should easily peel away from.

Strangely, when cooled, it appeared that the pink and white marshmallows seperated and gave this rather nice neopolitan effect.

Slice to eat. To re-soften the marshmallows a bit, pop in the microwave for 10-15 seconds but watch out you will get totally sticky, and HAVE to lick your fingers!